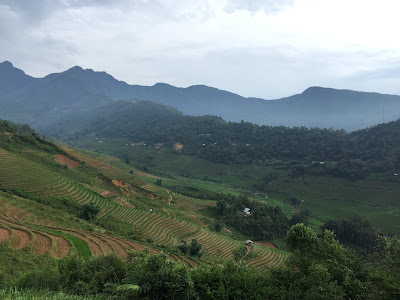 Stop your fighting and know that I am God,
exalted among the nations, exalted on earth.
— Psalm 46:10

Day breaks peacefully on the terraced rice fields of Vietnam as this ancient call for peace touches my soul. As an American child of the 60s the very word Vietnam brings back sounds and images of war. Walter Cronkite daily narrating evening news reports. Grainy, black-and-white video displaying our side of the war story. As the saying goes, there’s two sides to every argument, or war in this case. The reasons for that war are way too convoluted for me to comprehend but the two sides of this story can be summed up in the different names it has been given. We know it as the Vietnam War but here it is called the American War. Same conflict — different perspectives. And perhaps we should give more weight to the perspective of those who personally endured the horrors of war rather than our secondhand view from the secure comforts of our living rooms.

War left here decades ago. Vietnamese now enjoy peace and prosperity, graciously welcoming American tourist. We have stopped our fighting, however we haven’t done so well with the second phrase of the Psalm. The one true and living God is still mostly unknown here. He is not yet exalted in this nation.
Posted by Unknown at 5:48 AM

Sign up to get Monty's Musings sent directly to your inbox