No Rocks, No Stones 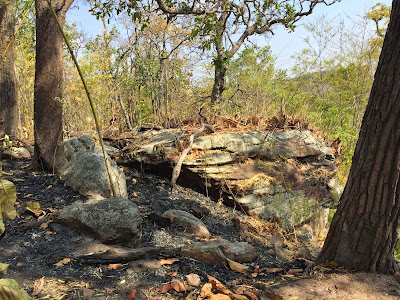 Many would say Pol Pot must’ve come up from the very bowels of hell. Forty years after his sadistic reign of terror and death the misery, pain, and bone chilling fear is still evident in the eyes of those around me as we prayerwalk along the back roads and trails of rural Cambodia. Our XMA team is seeing a very different side of Cambodia than the romanticized Indiana Jonesish Angkor Wat seen in tourist brochures.

Today Mr. Treing is guiding us on a hike through Kirirom National Park to an ancient Buddhist temple-cave. Not far ahead of us a wildfire has swept up the same mountainside. Everything is charred black. Smoke from the deadwood still drifts up with the slight breeze.

After praying at the first temple-cave my companions take Mr. Treing up on his offer to hike on to another cave. I’ve found a nice shady perch on a rock outcropping so I opt to stay behind praying over the sweeping view of terraced farms below. I alternate between looking behind me at the blackened mountainside while praying for the fledgling Cambodian church and turning back to the valley below me as I pray for the millions still trapped in systems of spiritual darkness.

Just to my left I notice a large flattop boulder with a dozen or so ferns growing on top. Their fingerlike tendrils reach up to the sun like hands lifted in praise to the God of all creation. I recall Jesus telling the Pharisees that if the people don’t praise Him the stones will cry out. Meditating on this, the words of an old Among Thorns song come to my lips, “You say the rocks will cry out if I don’t praise you, well I say… No rock, no stone, no way will they praise you stronger than I can.” I continue in praise singing the Doxology. 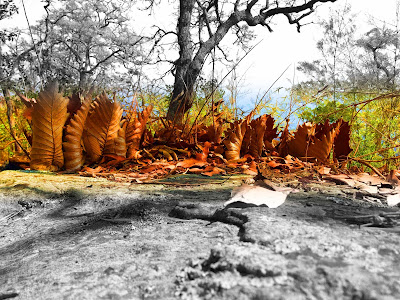 The scorched earth all around me is a vivid reminder of Pol Pot’s attempt to destroy the church by brutally killing all Christians.  But the Word tells us the gates of hell shall not prevail against God’s church. This truth is very vividly portrayed here in Cambodia.  Pol Pot is dead and presumably gone back to the hell from which he came. And God’s church is now rising back up from the ashes of Pol Pot’s destruction like a phoenix. Our prayerwalking team is using Operation World’s prayer guide for Cambodia to lead our prayers this week. One of the prayer points in this guide is for the local Cambodian church and local Christians to rise up and proclaim God’s glory before the “Pharisees” of the predominant idolistic religion around them.

God will be praised here and in every remote, war-torn corner of our world. If we, God’s people, don’t praise him then the stones will cry out.
Posted by Unknown at 9:29 AM

Sign up to get Monty's Musings sent directly to your inbox